You Want To Get Good, But Here is the Problem:
PUA is Full of Weird People and Costly Rip-Off Bootcamps.

The problem with looking for other wings on PUA forums and lairs is that 99% of guys are weird and terrible and are likely to turn you into a creeper.  Ever read a PUA forum and see some dude with a billion posts giving advice? You think he’s awesome and then one day you actually meet him in real life and he is a complete tool.

Don’t even get me started with most pickup companies.  There are no credentials required to be a pickup coach.  You can slap up a website and call yourself one.  Over the years, I have been to many pickup conventions and spoke to many coaches.   I have also had students who have taken bootcamps with other companies.  My friends and I have personally observed many coaches in the field.  There are just tons of horror stories.  I will share with you a few.  Names of companies are of course taken out. 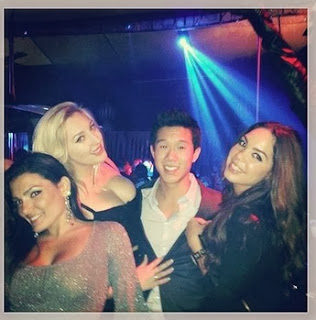 Yep, definitely a 4-some going down.  LOL okay bro, lets be cereal, it was the table and the free drinks.
When you sign up with here, you get me and only me.  With larger companies, you’re at the mercy of a random coach, and even worse, a junior coach or even an intern!

Objective of a Bootcamp
A good bootcamp experience includes 6 components.

I am currently the only coach on the planet to place a microphone and wireless transmitter on every student as well as having the equipment capabilities to record the student infield videos for the entire duration of the night.

Why Most Guys Don’t Get Good
The hardest part of PU is the first 3 month hump.    For most people, 3 months is the make or break point.  If you don’t see results by the third month, you are statistically likely to drop out.  Have you seen anybody stay on a workout program after seeing no results for 3 months?  It’s very rare indeed.  Still don’t believe me?  Go to a PUA convention and then go back the next year and see how many people still remain.  The dropout rate is 90 – 95%.  If you are a random guy, there is a 19 out of 20 chance you will quit PU just like everyone else.

Take my personal experience.  I was exposed to PU at age 23 (2006) heart broken from an ex girlfriend and the same sad story that nobody gives a shit about so I will save you the trouble of reading, LOL.  I didn’t seriously commit to approaching till I was 28.  I know what you are thinking: “WTF, this buff guy used to be scared of approaching? How can it be?” Well, its the truth.  I was basically a keyboard jockey for 5 years and the only reason I ever got good was because I was fortunate enough to meet a PUA coach that took me under his wing as an assistant.  That is how damn lucky I am.  I worked with him 5 nights a week, I went to every single bootcamp and in-field training he taught, and I transcribed all the teleconference calls.  For two years, I pretty much sold my soul to pickup.  I am what you call a natural with a synthetic understanding of game.  In essence, someone who appears natural when you watch him but yet he can break down game structure.

I used to think “If I just read one more book, if I read one more material, I would make the perfect approach”.  That answer is FALSE.  Look at how many books I bought.  It did nothing but paralyze me and prevented me further from going out.  Even going out and standing in a club doing NOTHING is better than reading 10 books.

Look at how many books I bought.  I think I just killed the Amazon rain forest with all this paper.  Stop reading!  It wont help! You want to become an approach machine as soon as possible so you can start seeing enough results to motivate you further.   As soon as you start getting numbers and make outs, the mentality of going out reverses from a painful experience to a fun one where you’re anticipating something great to happen every night.

Sure techniques are important but people don’t realize that learning anything requires good habits.  How are habits driven?  Unless you have amazing self discipline, your habits are largely driven by the people you associate and hang out with.  If you hang out with people who approach 20 sets a night, you are likely to approach 20 sets a night.  If you hang out with people who stand around and make excuses, you are likely to do the same.  Remember Mystery’s 3 second rule for approaching?  Well, I got a one second rule!

Here are the Services I Provide:

Here are the Following Sticking Points I Can Help You With:

————————————-
Results / Testimonials
Here are some videos of students making amazing progress during bootcamp.  This is only a small subset of what happens on a near weekly basis.


Two students work a 2 set.  One student pulls another girl back to the condo.
Indian student’s first time doing day game ever.  Gets significantly better within 2.5 hours of day game infield.

Asian student who is in his mid 40’s is still getting results from girls half his age.

Student gets his first insta-date reference experience during Vegas infield. Ends up getting the lay on Saturday at Marquee Nightclub.

Student has trained with me since August, 2013.  Now has double digit lays.

Initially, what was a 30 second blowout after having the set taken over by other guys, under my guidance, the student is able to re-engage the girl and eventually pulling her out of the club.

Still not convinced?  Please visit the results / testimonial page.  Obviously I can not guarantee you a lay on a bootcamp because everyone comes with different starting skills.   For all you scientists, engineers, statisticians, from a overall grand mean point of view, in over 50% of the bootcamp weekends, one of the student pulls a girl outside of the venue.  Also, 60% of the students have gotten laid within 2 months from taking a bootcamp.  I have a private Facebook page in which other students can confirm.

>>Results / Testimonials<<
The training application is for serious enquirers only.  Since I put in a lot of effort on quality training, I only want quality students.  This does not apply to your current skill level but your work ethics.  If you’re not expecting to go out a minimum of 2 nights per week or 8 nights a month then it is pointless to get training.  If you’re the type of person who is constantly hanging out with your friends, or celebrating birthday parties, or setting up your day 2’s on Fridays and Saturdays instead of dedicating to cold approach doing 15 – 20 sets per night, you are not ready for a coaching.  I can only fit 12 people per month on my schedule so I want to pick the ones that really want to change.
Complete the application form in the link below and get a free 30 minute phone or Skype consultation:
(All information are confidential)
http://bit.ly/TF35yv

One Time Training
The cost of one time infield training is 997$ and the deposit is 500$.  The remainder will be paid upon meetup.

Continuous Training
Some people may require more than one iteration of training.  The following options allow you to take training one weekend per month or one weekend every other month.  The benefit of long term coaching is more consistency and accountability.  This minimizes reversion after taking your first infield.  Since there are less paper work on my end, students in long term training will receive 10% off.  The minimum commitment for continuous training is 3 infields.  This is 3 months for monthly training, and 6 months for every other month training.

Cross Country Road Trip – 10/2 – 10/6 (New York City)
Tues-Sun 10/2 - 10/6 New York CityIf Vegas is considered…
Picking Up Girls in Shanghai Infield Video
Welcome to another video for the week! I think…
Direct vs. Indirect
This topic has been debated probably hundreds of times and…
Product Recommendations
These products help.  They are not magic pills.  Expect maybe…